How to Make Your Girlfriend Love You Again: 5 Steps

If your girlfriend has fallen out of love with you and no longer feels the same way, it is possible and usually very easy to get her to fall back in love with you again.

1. Understand what really caused her to fall out of love with you

A big part of how to make your girlfriend love you again, is to understand what has really caused her to fall out of love with you.

For example: Some of the reasons why a woman will fall out of love with a guy include:

There are many different reasons why a woman will fall out of love with a man in a relationship, but it all really comes down to the guy’s inability to deepen her feelings of respect, attraction and love over time.

When a relationship begins, it’s very easy to experience feelings of love because the lust and excitement of being with someone new makes both of you feel like you’re in love.

However, to keep a relationship together for a lifetime, a man needs to be able to deepen his woman’s feelings of respect, attraction and love over time.

So, if you are serious about getting your girlfriend to fall in love with you again, the most important thing for you to is truly understand what has really caused her to fall out of love with you.

Some guys make the mistake of assuming that it’s because he isn’t buying her enough gifts, doesn’t have big enough muscles or other superficial things like that.

However, the real reasons why a woman will fall out of love with a guy have more to do with who he is as a man and how that makes her feel.

2. Make the right changes to your behavior, communication style and attitude

When a guy is trying to make his girlfriend fall in love with him again, he will sometimes make the mistake of offering things that have no real value to her.

For example: He might become even nicer to his girlfriend (even though he is already a good guy), give her all the power in the relationship, do favors for her, buy lots of things for her, wear more expensive clothes, working out at the gym more and taking her on expensive holidays and vacations.

While all those things can be attractive to a woman, if the fundamental respect and attraction isn’t there on her part, then she’s not going to really value any of those superficial things.

So, if you want your girlfriend to fall in love with you again, you must be making the type of changes that will make her feel like you finally understand her and know what she really wants from you.

For example: If you’re a guy who lacks purpose and direction in life, you need to get clear on your biggest goals, dreams and ambitions in life and start making progress towards that, rather than spending all of your time with her so you can hide from the world and your potential behind the relationship.

If you have become insecure, you need to focus on becoming emotionally strong as a man.

If you have become controlling and too protective, you need to relax and start to trust in her attraction for you and commitment to you.

If you’ve become annoying or are constantly arguing with her, you need to start focusing on being more light-hearted and creating a relationship dynamic that includes a lot of laughter and smiling.

3. Start building on her respect and attraction for you

Once you have begun to make changes that appeal to her, you then need to build on her renewed sense of respect and attraction for you.

This will happen when she can see that all of the most of the little things that have been annoyed her about you are gradually beginning to change.

When she spends time with you, she will be smiling, laughing and feeling good rather than feeling turned off, annoyed or agitated around you.

If you don’t know how a woman’s attraction for a man really works, watch this video…

You have a lot of direct control over how much or little respect, attraction and love that you make your girlfriend feel.

If you are talking to her, behaving and taking action in ways that make her feel respect and attraction for you, her love for you will naturally build and become stronger over time.

4. Add more variety to the emotional experience of being with you 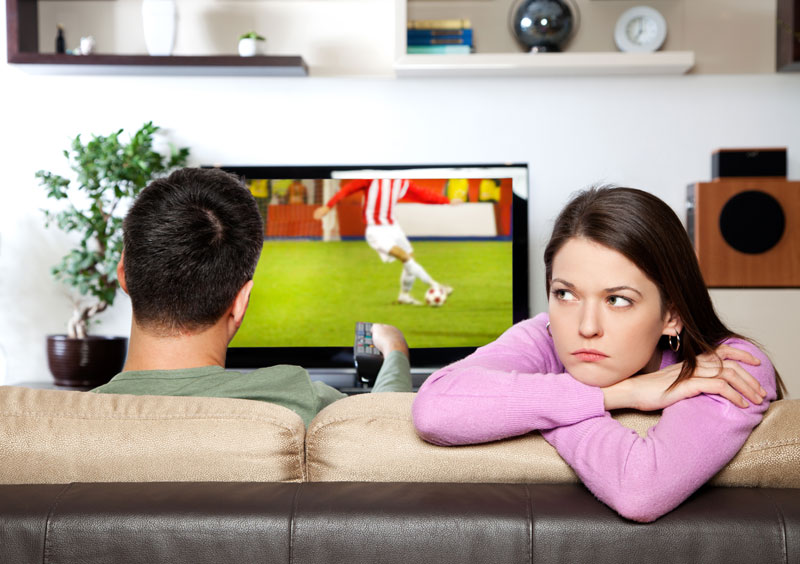 One of the reasons why a woman will fall out of love with a man is when the emotional experience of being with him becomes too predictable and boring.

Many guys make the mistake of thinking that a woman will be happy to stick with him for life because the relationship felt great at the start and they had a lot of great sex.

However, just because the relationship was fun and exciting at the start, it doesn’t mean that a woman will hold onto that old memory and be happy with it for the rest of her life.

What makes a woman feel truly happy and excited to be in love with a guy is when the emotional experience is interesting and varied.

For example: If a guy has fallen into a routine of just hanging out with his girlfriend all weekend to watch TV, browse the internet, look at social media and eat, then it will be fun initially, but it will also become boring if it is on repeat for a long time.

To mix things up, he needs to think of fun and interesting activities to do with his girlfriend (e.g. go for a relaxing hike, a drive down to the beach for sunset, go to a winery, catch up with friends, have a house party, hold a dinner party, go on a holiday, learn something new together, go to weekend markets and maybe even get a pet).

Personally speaking, when my girlfriend and I (who is now my wife) got two kittens, it added to the enjoyable emotional experience of our relationship by bringing so much more happiness, joy and relaxation to our lives.

She is the one who cleans up after the cats and feeds them and we have a lot of fun playing with them, watching them and talking about them from time to time.

It has added an extra element to the enjoyable emotional experience of being together as a couple.

If we didn’t have those two cats, things would be a little bit quieter around the house at times.

Likewise, if we didn’t have friends, we wouldn’t have to do on weekends.

If I wasn’t dominant enough as a man, I would have listened to her initial “No” and wouldn’t have lead the way for us to get into the habit of going for a relaxing walk at a nearby mountain.

Yet, I was persistent and during the first walk she said, “This is so relaxing…I like walking now” which was completely different to the, “No way! I hate walking…” when I first suggested it.

So, to make things right with your girlfriend, you need to work out where you and her are lacking in the emotional experience of being together and start adding it into your relationship.

5. Continue to become an even better man over time

One of the main things that makes a woman fall more deeply in love with a man over time is when she can see that he is a consistently great man.

He consistently becomes a bigger and better man over time by continuing to reach for his goals in life, while also being a good, loving man towards her and giving her the time and attention she needs.

He doesn’t give up on achieving his goals when it gets too challenging and he doesn’t seek her pity when he is down. He remains strong and keeps pushing forward on his way to achieving his true potential as a man.

This allows her to relax into his masculine direction in life, rather than feeling as though she needs to be the more mature and responsible one and work hard to create a better future for the both of them.

He is someone that she can look up to and respect, which makes her feel proud and excited to be in love with.

You don’t have to become Mr. Perfect, save the world or achieve humungous success in life, but you just need to become a bigger and better man than who you are right now.

You’ve got to keep pushing forward to reach your true potential as a man, rather than hiding from it behind the relationship with her.

She doesn’t want to feel as though she has to protect you from the big bad world out there.

She wants to be able to trust in you to be the man and lead the way to a better life for the both of you over time, while also being loving and respect towards her.

If you can do that for her, she will naturally remain in love with you and will be happy to stick with you for life.

Don’t waste time ignoring your ex or trying to convince her to give you another chance. This simple trick will change her mind and make her want you back today…

Yes, I want free tips via email from Dan Bacon. I can unsubscribe at anytime with a click.

Yes, I want free tips via email from Dan Bacon. I can unsubscribe at anytime with a click.