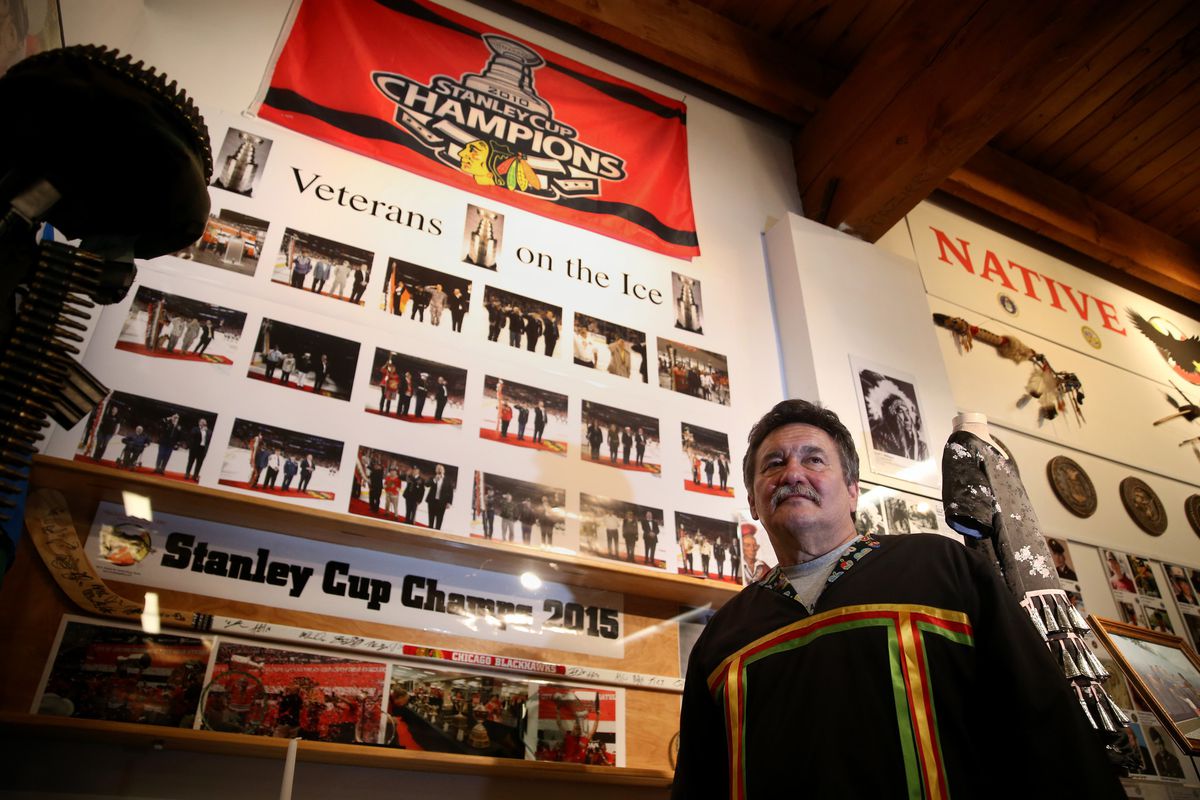 Joe Podlasek is a longtime Chicago Blackhawks fan, but he didn’t like them as much 15 or 20 years ago.

Podlasek, who is Ojibwe and Polish, remembers being offended at the sight of fans at the United Center mimicking Native American dress and war chants while cheering on the home team.

“They had pink and white headdresses and faces painted in black and red,” said Podlasek, who runs the Trickster Cultural Center in Schaumburg. “Some were looking pretty silly.”

Podlasek began working with Blackhawks management 10 years ago on a program of cultural education, and through his interactions with fans over the years, he said the number of fans who dress as a Native American stereotype at each game “went from 300 to two.”

“I can see how you might chalk that up as a victory,” he said, “but imagine the kind of impact that you might have had if you had just not used that (name) to begin with.”

The Blackhawks name, logo and imagery, which Native American advocates have challenged for decades, have come under increased scrutiny again this month because other sports teams, such as the NFL’s Washington Redskins and Major League Baseball’s Cleveland Indians, have started reviews into possibly changing their names.

The Blackhawks, who are named after Sac and Fox Nation warrior Black Hawk, issued a statement late Tuesday addressing their stance on changing the name.

“The Chicago Blackhawks name and logo symbolizes an important and historic person, Black Hawk of Illinois’ Sac & Fox Nation, whose leadership and life has inspired generations of Native Americans, veterans and the public,” the statement read. “We celebrate Black Hawk’s legacy by offering ongoing reverent examples of Native American culture, traditions and contributions, providing a platform for genuine dialogue with local and national Native American groups. As the team’s popularity grew over the past decade, so did that platform and our work with these important organizations.

“We recognize there is a fine line between respect and disrespect, and we commend other teams for their willingness to engage in that conversation. Moving forward, we are committed to raising the bar even higher to expand awareness of Black Hawk and the important contributions of all Native American people. We will continue to serve as stewards of our name and identity, and will do so with a commitment to evolve. Our endeavors in this area have been sincere and multifaceted, and the path forward will draw on that experience to grow as an organization and expand our efforts.”

The Blackhawks, however, will likely continue to face pressure from tribal groups and social justice advocates, said Suzan Shown Harjo, the lead plaintiff in a landmark lawsuit against the Washington NFL team.

“They have to look around and see that society has changed,” she said. “It’s changing. This is what the social justice movement is about. This is what Black Lives Matter is about. … What everyone is striving for is stopping all this bad stuff that’s been happening and building over the years.”

Native American advocates, however, don’t all agree about the Blackhawks name, saying their case is more nuanced.

Some credit the team for granting money and access to indigenous groups to raise awareness about Black Hawk’s history and cultural issues faced by Native Americans.

Sac and Fox tribal ambassador Juaquin Hamilton said, “When we’re in town, the Blackhawks allow us a booth in the concourse (of the United Center) to pass out pamphlets and share history about our war leader (Black Hawk), our Olympian Jim Thorpe and our tribe.”

Detractors say it’s cultural appropriation and that such measures are a way to “kick the can down the road” on dealing with pressure to change the name as well as a means to pacify audiences to make their brand seem more benign or even flattering to Native Americans.

“I would say it’s a pretense more than anything,” said the NAJA’s Pollard, whose organization appeals to media colleagues to stop printing and airing what they consider offensive team names. “Teams have a vested interest in supporting their brand. Many of these brands are decades old. So they’re going to do whatever they need to do to perpetuate the brand.”

Stephanie Fryberg, an associate professor for American Indian Studies and Psychology at the University of Washington, said the names and images create a slippery slope toward using a group of people as tokens and symbols.

“I just put into Google ‘Chicago Blackhawks fans’ and hit ‘Images,’ ” she said during an interview with the Tribune. “Right there you can see how they are discriminating against native people. You see non-native people with feathered headdresses. You can find images of people whose faces are painted red. People who are jumping around.

“This is not the behavior of an organization that is honoring native people. They are giving non-natives license to discriminate against native people by engaging in actions that stereotype and limit (their) potential.”

Fryberg, who hails from the Tulalip tribe, has conducted several studies on the psychological effects of racialized logos and names and was a lead contributor on an amicus brief in Harjo’s pioneering lawsuit against the Washington NFL team.

“Frankly, the research is very clear,” she said. “Across numerous scientific studies, there are no positive benefits to using native people as mascots. It leads to discrimination (against all people of color), increased depression, suicide, increased suicide ideation (and) lowered achievement in school.”

She said studies have shown the presence of such mascots and nicknames also has a psychological impact on white children, subconsciously encouraging bullying and discrimination.

“I appreciate the (Blackhawks) organization’s effort to hold up indigenous people and indigenous culture, but the truth is you cannot do it in a sports domain,” Fryberg said.

In 1926, coffee mogul Frederic McLaughlin purchased Chicago’s NHL expansion franchise and named it the Black Hawks after a World War I unit he commanded known as the “Blackhawk Division.” His wife, famed dancer and actress Irene Castle, designed the original Indian head logo.

The battalion’s namesake was Black Hawk, who was a military leader for the Sauk Nation in the 1800s.

In 1830, Black Hawk’s Sauk tribe moved from present-day Rock Island, Illinois, west of the Mississippi River into what is now Iowa as party of a treaty with the U.S. government on the condition that the Sauk would receive food and shelter.

“And the food and the shelter never came,” Hamilton said. “Our people were starving, so Black Hawk and some of his followers went back to Saukenuk, which is one of the largest Indian villages of that time” in 1832.

That set off what’s known as the Black Hawk War.

“It wasn’t a war,” Hamilton said. “When we crossed back into Illinois, the Illinois militia and the government took it as an armed invasion, but we were just trying to go eat, get back to our crops.

“Most of our people were wiped out. They call it the Battle of Bad Axe, but it wasn’t really a battle. Most of our members (at the time) were elderly, women and children.”

Afterward, Black Hawk was taken into custody and showcased on a tour of East Coast cities, “like, ‘Hey, look what we got. We got the biggest, baddest war leader in the country,’ ” Hamilton said.

Hamilton and others said it’s a painful history that often gets overlooked or misrepresented in school curricula. He appreciates the partnership with the Blackhawks to promote education about the Sac (an alternative spelling of Sauk) and Fox people.

The team reached out to him in October 2015, and since then Hamilton has brought pow wow dancers to the United Center and helped provide cultural education every November for Native American Heritage Month.

Melodi Serna, a Native American U.S. Navy veteran, holds the Williams family Eagle Staff, which dates from World War I, during the singing of the national anthem before a Blackhawks-Jets game April 1, 2019. (Matt Marton/AP)

Podlasek’s relationship with the team goes back a decade.

“Probably 12 to 15 years ago (when he directed the Chicago-based American Indian Center), I had a problem with the Hawks because they wouldn’t engage with the native community,” he said. “Then we had the switch over to Rocky Wirtz” as chairman.

“I’ve worked with them for 10 years now, and it’s been a great relationship about cultural understanding, having our Native veterans as part of their veterans on the ice. … They’ve been doing so much behind the scenes,” said Podlasek, whose Trickster Cultural Center has received $45,000 annually through the team’s foundation. “For a Native organization to work with a professional sports team that is understanding our cultural values and importance, they just haven’t made a big splash out of it.”

‘We’re not flattered by this’

That doesn’t negate the problematic nature of the team’s name, however, said Heather Miller, the current executive director of the American Indian Center.

“What we’re really talking about here is the structural racism and the ongoing history of genocide this country is founded on,” she said.

But “we had these teams feeding these (same) images to ‘honor’ us because they thought that Indians were going to go extinct. It’s not honoring. We’re not flattered by this. We want changes.”

She also takes issue with team traditions, such as not walking on the Indian head logo in the locker room, that are touted as a sign of reverence.

“All of that is so cute. Good for you,” Miller said. “You’re creating this narrative, this story that says, ‘Yes, it’s so worshiped, we’re so revering it, we don’t even walk on it.‘ … This could be somebody’s middle finger (as a logo), but because they’re saying, ‘We revere this so much, it’s so amazing, it’s so beautiful, we don’t even walk on it,’ of course fans are going to be like, ‘Oh, yes, so beautiful.’ ”

Harjo, president of the Washington-based Morning Star Institute, likened such symbols to “toys of racism.”

“We have changed more than two-thirds of these stereotypes and cultural appropriations in American sports since the first one fell in 1970 at the University of Oklahoma — Little Red — and we moved steadily through over 2,000 of them,” she said. “We have 900 more to go. Among them are the Washington team and the Blackhawks.

For at least one local fan who is Cherokee, the Blackhawks shouldn’t necessarily be lumped in with the Washington NFL team, whose name harks back to a time when local governments paid bounty hunters to kill American Indians — with rewards based on whether they produced a scalp belonging to an adult male, an adult female or a child.

“Redskins, I don’t agree with,” said Tina Garrity, a dental assistant with Hines VA Hospital. “Blackhawks, it’s like you’re naming a school after a prominent African American. Why would you not name a sports team after a prominent Native American Indian?”

The 48-year-old Broadview resident grew up on the South Side admiring the physicality of hockey and took pride in the team name’s association with her heritage.

“I love the fact that they highlight Native Americans in a positive light and they’re called after a tribal leader that in my book was a badass,” she said. “That’s something I never knew in history books.”

Whether fellow Native Americans or other people agree with her stance, she appreciates that there’s at least a dialogue.

“It’s kind of refreshing. It’s an area nobody ever asks how we feel,” she said. “I hope they don’t change their name. I love the Blackhawks.”