Biden Accusations: Don’t Defend Him as a Flirt 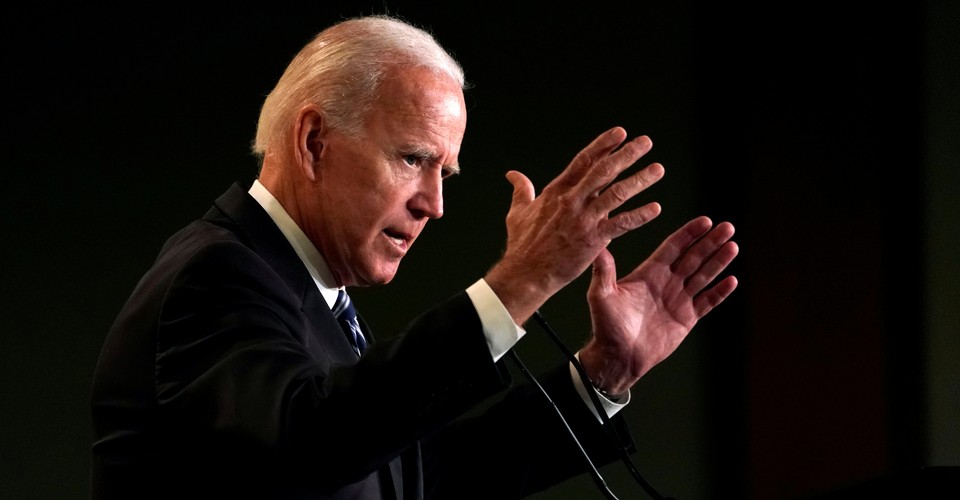 Two women have come forward to accuse the former vice president of inappropriate touching. And some have defended him on all-too-familiar grounds: It’s just flirting. 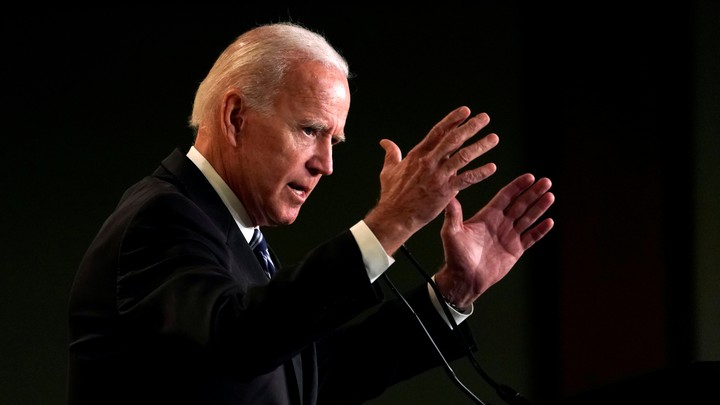 On Monday afternoon, a second woman came forward with allegations that Joe Biden had touched her inappropriately. It had happened in 2009, Amy Lappos told the Hartford Courant, when both she and Biden, then the vice president of the United States, were attending a political fundraiser in Greenwich, Connecticut. “It wasn’t sexual,” Lappos said, “but he did grab me by the head. He put his hand around my neck and pulled me in to rub noses with me. When he was pulling me in, I thought he was going to kiss me on the mouth.”

Lappos’s claim is extremely similar, in its contours, to the one made last Friday by Lucy Flores, the former Nevada state assemblywoman who also says that Biden touched her inappropriately—this time during a 2014 rally held while Flores was running to become Nevada’s lieutenant governor. In an essay for The Cut, Flores wrote that Biden had, during that event, approached her from behind while the two had been waiting to go onstage, put his hands on her shoulders, smelled her hair, and then planted “a big slow kiss on the back of my head.” It wasn’t behavior that amounted to sexual assault, Flores, like Lappos, made clear; it was behavior, she suggested instead, that invaded her space and made her deeply uncomfortable and read to her as unprofessional and demeaning and just generally—a word that has long been associated with Joe Biden—creepy.

“There’s absolutely a line of decency,” Lappos told the Courant. “There’s a line of respect. Crossing that line is not grandfatherly. It’s not cultural. It’s not affection. It’s sexism or misogyny.”

This should not require saying. The kind of behavior that Lappos and Flores are accusing Biden of engaging in is, at the very least, profoundly disrespectful. And yet the notion that Biden is simply an affectionate person—that his creepiness is merely an inevitable outgrowth of his considerable charm—has been circulating among the American media, summoned as both an explanation and an attempt at exoneration. “I am sure that somebody can misconstrue something he’s done,” Mika Brzezinski said on Morning Joe on Monday, discussing Flores’s allegation. “But as much as I can know what’s in anyone’s heart, I don’t think there is bad intent on his part at all.” Instead, Brzezinski suggested, the matter is much simpler than that: Biden, she said, “is extremely affectionate, extremely flirtatious in a completely safe way.”

Extremely flirtatious in a completely safe way. (Here, to be clear, is more from Flores’s essay: “I was embarrassed,” she writes. “I was shocked. I was confused … I couldn’t move and I couldn’t say anything. I wanted nothing more than to get Biden away from me.”)

In one way, the allegations against Biden are shocking. In another way, though, they are precisely the opposite. Flores and Lappos have accused Biden, after all, of engaging in exactly the kind of behavior that he has been repeatedly documented engaging in, over a period of years, through file photos and C-SPAN footage and the other media that steadily help to convert American politicians into American celebrities. Gawker, in early 2015, published an image essay taxonomizing the varied ways Biden has been photographed interacting—closely and intimately and publicly—with women and girls. So did New York magazine. The Daily Show offered a video-based version of the same: “The Audacity of Grope,” the segment was called. (It featured documentary footage of Biden engaged in assorted acts of woman-whispering, and culminated in Samantha Bee, the show’s fake White House correspondent at the time, appearing with the front of her blouse and the back of her skirt marked with handprints. She had just come from a meeting, Bee explained to Jon Stewart, with the then vice president.)

The women’s claims, then, are very specific allegations issued into a broader environment in which the term allegation no longer fairly applies. There is no way to broadly deny, given the documentary evidence at hand, that Biden has behaved, in the recent past, precisely the way the women claim he has. And yet Biden, who has premised the current iteration of his ever-evolving political persona largely on his championing of women—he introduced 1994’s Violence Against Women Act—found a way, despite it all, to deny their claims. He did so in regard to Flores’s allegation, via a statement delivered through his spokesman on Sunday, like this:

In my many years on the campaign trail and in public life, I have offered countless handshakes, hugs, expressions of affection, support, and comfort. And not once—never—did I believe I acted inappropriately. If it is suggested I did so, I will listen respectfully. But it was never my intention.

I may not recall these moments the same way, and I may be surprised at what I hear. But we have arrived at an important time when women feel they can and should relate their experiences, and men should pay attention. And I will.

The statement, polite and respectful and insisting that Biden very much believes women, even if he does not believe this particular woman, concluded with a reminder of the statesman’s bona fides as a feminist champion: He has hired women staffers, the response noted, and, in the Senate, fought “to end violence against women and ensure women are treated with the equality they deserve.” The substance of Biden’s rejoinder to Flores, however—a spokeswoman, while declining to respond to Lappos’s allegations, referred the Courant to the same broad statement—is the brief document’s introduction: “Not once—never—did I believe I acted inappropriately.” If it is suggested that he has done so, however—though the statement itself, of course, is responding to just such a suggestion—Biden will listen respectfully. “But it was never my intention.”

What is the it here, exactly? Inappropriate behavior? Biden’s own belief in the inappropriateness of that behavior? The statement takes notable refuge in the conditional tense: If. May not. May be. Can and should. But. And it allows, in the process, other people to step in where his own statement trailed off: Brzezinski, who doesn’t think there is bad intent on his part at all. Biden staffers who remain honored to have worked for him. Stephanie Carter, the wife of the former Defense Secretary Ashton Carter and the subject of one of the more iconic of the Biden-touching-women photographs: Biden “kept his hands on my shoulders as a means of offering his support,” she explained on Sunday of that image.

None of these statements were relevant to Flores’s allegation, as they had little to say about the specifics of her claim; what they permitted, however, is a kind of generalized suspension of disbelief. Many Democrats have a vested interest in seeing Biden in epic terms, as a savior and fighter and Trump-slayer; his non-apology apology—one that echoes uncomfortably the similar one he offered-not-offered to Anita Hill—allows for the mythology to live on. Biden the champion; Biden the harmless flirt; Biden, who suffered so much and means so well; Biden, who is somehow powerless against the forceful enthusiasms of his own affections. The framings allow the believers to look at all the evidence—the videos and the photos and the ear-whispers and the too-close conversations and the young girl who strains mightily to avoid the vice president’s incoming forehead kiss—and, in spite of it all, toss up their hands: Who’s to know what’s in his heart?

The affection defense is extremely familiar in its contours and related to many other common tropes: Boys will be boys; I know him and I know he wouldn’t; he said/she said and who can know beyond that; the intentional fallacy. And affection, thus deployed, does what the other defenses can do as well: It can preclude conversation. It can shroud the known facts—in this case, the photos and the videos and the testimonies of Lucy Flores and Amy Lappos—in a fog of implied unknowability. It can allow people to suggest that Flores, for example, is coming forward only because she is a partisan of Bernie Sanders, and to refuse to think more on the matter; it can encourage them to believe, incorrectly, that she has accused Biden of sexual assault, and then to complain that #MeToo has gone too far. It can cede truth to myth.

What the public deserves in all this is a robust conversation about what the kind of behavior in question here—breezy, entitled, archaic—means when it is engaged in by politicians who seek to lead the country. It certainly does not follow that the women’s accusations would disqualify Biden from the presidency; one could point out, fairly, that Biden has behaved this way with men as well. (“Joe Biden doesn’t just meet you, he engulfs you,” Mark Bowden wrote in The Atlantic in 2010, generalizing the notion of Bidenian affection. “If he’s in a chair, he’ll scoot it closer; when the furniture’s not portable, he’ll lean forward, planting his elbows on his knees, gesturing with both hands while he speaks, occasionally reaching over to touch your arm or leg for emphasis.”)

But “affection,” weaponized, prevents that conversation from happening at all. It expands to accommodate whoever else might come forward to talk about Biden’s behavior. It allows the specifics of the women’s stories—the rally, the party, the hands, the hair, the neck—to dissolve into the hazy mythology of the male leader and his penchant for harmless flirtation. “Joe Biden’s affectionate, physical style with women comes under scrutiny,” The Washington Post put it in a headline on Sunday evening. But the question remains, despite it all: What happens after the scrutiny? Joe Biden acknowledged in his statement that men should pay attention. How will he do that when he refuses to acknowledge the thing that requires the attention in the first place?

We want to hear what you think about this article. Submit a letter to the editor or write to letters@theatlantic.com.

is a staff writer at

, where she covers culture.